More than 400 scientists from across the globe met in Basel from July 2–4, convening for the fifth edition of the PASC Conference. “Fast and Big Data, Fast and Big Computation” was, with more than 200 talks on the subject, the theme at PASC18. 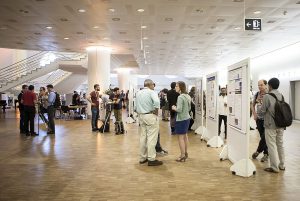 Computing (PASC18) Conference, which promoted the exchange of knowledge in the area of scientific computing and computational science. The number of participants increased again this year. With it, the number of international participants also grew; 15% of participants at the first PASC Conference in 2014 travelled from outside Switzerland, but the proportion increased to 50% in 2018. All eight scientific disciplines represented set new standards, and the discussions stimulated interdisciplinary exchange, mainly through the keynotes and minisymposia. The event organisers recruited, not only for the keynote presentations but also for the 48 minisymposia, more well-known scientists than ever before.

Alongside a successful organisation, which provided the perfect frame for the ambitious program, the conference chairs Florina Ciorba, Assistant Professor at the Department of Mathematics and Computer Science at the University of Basel, and Erik Lindahl, Professor of Biophysics at the Department of Biochemistry and Biophysics at Stockholm University, Sweden, were the professional moderators who encouraged the discussions and helped bring the statements of attendees and speakers to the point.

The primary theme during the podium seminars, keynotes and discussions was the need for improved algorithms, open access to data and the reproducibility of data in High Performance Computing (HPC). Throughout the conference, scientists exchanged ideas about these challenges in the fields of Climate and Weather, Solid Earth Dynamics, Life Sciences, Chemistry and Materials, Physics, Computer Science and Applied Mathematics, Engineering and Emerging Application Domains among others. Once again, the shared concern among attendees was the difficulty of capturing the interest of the up-coming generation: since more people with computer science skills are needed, and code development does not hold a high scientific status, it is necessary to make the topic interesting for budding young scientists.

The PASC18 Conference  began with a welcoming ceremony from the local hosts of the City of Basel and the conference chairs, followed by a keynote by Alice-Agnes Gabriel from Ludwig Maximilian University of Munich. 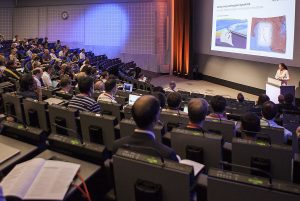 Gabriel researches the dynamics of earthquakes. In her keynote, she explained that the dissipation of seismic waves, which are generated through earthquakes, can be simulated very well today and used for displaying the Earth’s “tomography”. Because what happens at the origin site of the earthquake is still unknown, Gabriel’s team of scientists use simulations to research the mechanisms that cause the Earth’s crust to break. The researchers are trying, through tight collaborations with computational scientists, to shine a light on the processes that happen during an earthquake.

Another keynote, which was a public lecture, was given by the graph expert David Bader of Georgia Institute of Technology. In mathematics, graphs are diagrams that show how a quantity of specific objects, as well as the connections between them, looks. According to the conference chairs — and probably also to the listeners — the bottom line of Bader’s lecture is, “We are all part of a graph somewhere.”

The keynote speaker from the field of Weather and Climate simulations, Nils P. Wedi from ECMWF, laid out the necessity for a high-resolution simulation of the entire Earth system — the interaction between oceans, sea ice, land and atmosphere. This is needed, for instance, to warn people more precisely about hurricanes and heavy storms.

Marina Becoulet, from the Institute of Researching Magnetic Fusion at the French Atomic Energy Commission (CEA/IRFM), is an expert in the simulations of magnetic confinement fusion. She presented in her keynote not only the challenge in creating these simulations, from the particle description and the kinetic description to the fluid description, but also the valuable findings these simulations provide. This research serves as support for global energy production projects, including fusion reactors like ITER.

Aside from the podium discussions around “Big Data vs. Fast Computation – Is HPC Facing a Game Change”, PASC18 was the first conference in the series to host an interdisciplinary dialogue: ETH-Professor Petros Koumoutsakos interviewed the physicist Constantia Alexandrou, Professor at the University of Cyprus and The Cyprus Institute and expert in the field of quantum chromodynamics, about her research —all in the spirit of the interdisciplinary exchange for which PASC stands. 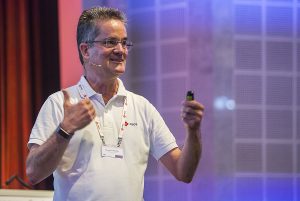 As always, CSCS director Thomas Schulthess informed the Centre’s users of its future plans and strategies. CSCS will have a successor to “Piz Daint” in 2020. According to Schulthess, the architecture is still being discussed, though, most likely, it’s going to be graphic processors again. Maria-Grazia Giuffreda, Associate Director and Head of User Engagement Support, also spoke about the usage of “Piz Daint” by the various disciplines, the process of application for computing time, and the necessity of high quality applications since the demand is 2 to 3 times higher than there is computing time available.

PASC19, focused on the theme of “Exascale and Beyond”, will take place from June 12–14 at ETH Zurich. Co-chairs will be be Haohuan Fu, Tsinghua University/National Supercomputing Centre in Wuxi, China, and Simon Scheidegger, University of Zurich, Switzerland.

PASC18 was the fifth edition of the PASC Conference series, an international platform for the exchange of competences in scientific computing and computational science, with a strong focus on methods, tools, algorithms, application challenges, and novel techniques and usage of high performance computing. The PASC18 Conference, co-sponsored by the Association for Computing Machinery (ACM) and the Swiss National Supercomputing Centre (CSCS), was held from July 2 to 4, 2018 at the Congress Center Basel, located in Basel, Switzerland. The local host of PASC18 was the University of Basel.