Prof. Paul Woodward of the University of Minnesota will give the last plenary talk at PASC16 Conference on Friday 10th June in the morning on “Simulations of Hydrogen Ingestion Flashes in Giant Stars”:

“My team at the University of Minnesota has been collaborating with the team of Falk Herwig at the University of Victoria to simulate brief events in the lives of stars that can greatly affect the heavy elements they synthesize in their interiors and subsequently expel into the interstellar medium. These events are caused by the ingestion of highly combustible hydrogen-rich fuel into the convection zone above a helium burning shell in the deeper interior. Although these events are brief, it can take millions of time steps to simulate the dynamics in sufficient detail to capture subtle aspects of the hydrogen ingestion. To address the computational challenge, we exploit modern multicore and many-core processors and also scale the simulations to run efficiently on over 13,000 nodes of NSF’s Blue Waters machine at NCSA. Results of these simulations will be described along with some of the key numerical and computational techniques that make these simulations practical.”. 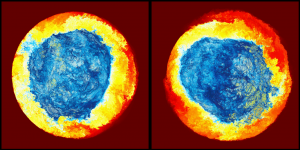 Paul Woodward received his Ph.D. in physics from the University of California, Berkeley in 1973. He has focused his research on simulations of compressible flows in astrophysics, s

tudying problems in star formation, supersonic jet propagation, convection in stars, and astrophysical turbulence.  He is a Fellow of the Minnesota Supercomputing Institute and directs the Laboratory for Computational Science & Engineering (LCSE) within the University of Minnesota’s Digital Technology Center. The LCSE concentrates on high performance parallel computation and the data analysis and visualization that this requires. Woodward received the IEEE’s Sidney Fernbach award in large-scale computing in 1995 and, with 12 collaborators at Livermore, Minnesota, and IBM, received the Gordon Bell prize in the performance category in 1999. His recent work combines simulation of convection, turbulence, and combustion in stellar interiors with the development of specialized techniques for exploiting the power of large networks of many-core computing devices.